On Friday the 3rd of March, I went to Inverness to take part in three accordion competitions at the Inverness Music Festival at Eden Court. I came first in Intermediate Classical, first in Advanced March, Strathspey and Reel and first in the Open section. I was a bit annoyed about my performance in the Classical, but I was pleased with my performance in the other two competitions. 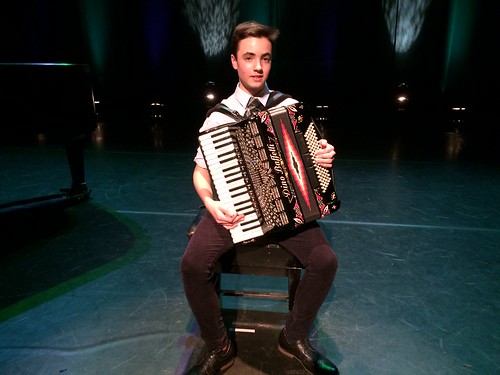 Since I achieved Distinction (87+) in the Open, I gained entry to the Elizabeth Davis Premier Competition (Scottish style) that was on the evening of Wednesday the 8th of March. I was there for seven o’clock. This competition is completely different because my accordion was competing against other instruments. There was a harp-accompanied Gaelic singer and a very good fiddler against me who had also won and gained distinctions in their respective open competitions. I was fairly nervous beforehand but I was very happy with my performance. I played a slow air called Ba mo Leanabh, a pipe march called Mrs John McColl, a jig called Donald Iain Rankine and a pipe reel by Gordon Duncan
called Andy Renwick’s Ferret.  I came first! I had been hoping for a good performance but I couldn’t have predicted that this would happen.

I’d like to thank Trish MacDonald, my accordion teacher, for supporting me – I would definitely not have been at a high enough level to take part without her guidance and teaching.