I am grateful to Dr Close, Raymond Dingwall and the Wester Ross Area Salmon Board  for giving me the opportunity to open the Fly Fishing Season. I was glad to take advantage of the opportunity I got because learning to fly fish isn’t something you would normally learn and I was glad to represent the school. Alexander MacLean (S6)

February 11th marks the opening of the Salmon fishing season in Wester Ross and for the last three years the day has been celebrated with a “First Cast” opening ceremony.

The river keepers, ghillies and their friends get together and offer the river a dram, make a speech and wish everyone good fishing; then an invited guest, a head teacher, politician, or a celebrity steps up and makes the first cast. 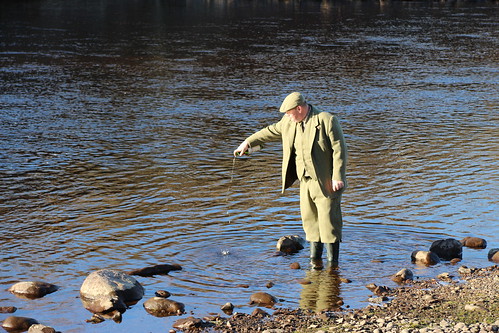 Tradition of offering the river a dram for good luck

This year it was different, the Wester Ross Area Salmon Fishery Board and Wester Ross Fisheries Trust asked Dr Close to help organise the event and he suggested that a Gairloch High School pupil be given the honour of making the first cast. 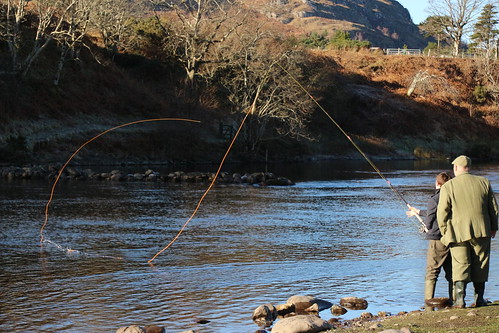 The motive: to promote an interest in Fly Fishing at Gairloch High School and beyond, as many of our young people have not had an opportunity to try this type of fishing.

Fly Fishing tourism is an important part of many peoples lives and livelihood in this part of Scotland.

Pupils had been asked to express interest in learning how to Fly FIsh and 23 have done so, Alexander Maclean was chosen as he had some fishing experience and a lot of enthusiasm, the problem was he’d never cast a fly before.

He had a couple of introductory lessons from Dr Close but help was needed and time was short.

Mr Raymond Dingwall, Riverkeeper of the Ewe and expert Spey casting instructor, stepped into the breech, Alexander had several lessons and showed his ability to learn a complex cast in a few short days.

On the day he was a wee bit nervous but he showed the crowd of Ghillies, Gamekeepers, Fishers, his Head Teacher, Teachers and members of the public, all assembled on the bank of the Ewe on Saturday morning, how it is done and with style as can be seen in more photographs on Flickr. 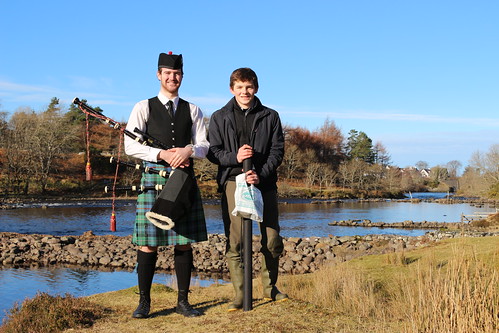 Thanks to everyone who came and some who travelled from Skye, Torridon and Ullapool to recognise the start of a busy fishing season.

Thanks to all who helped organise a memorable morning, Susan Kirkness for the warming soup and delicious cakes afterwards, and thanks too to Mr Bill Whyte for the gift of a complete Trout Flyfishing outfit from Grahams of Inverness , on behalf of the WRASFB and WRFT which was presented to Alexander in recognition of his commitment to learning the Spey casts and opening the 2017 fishing season.