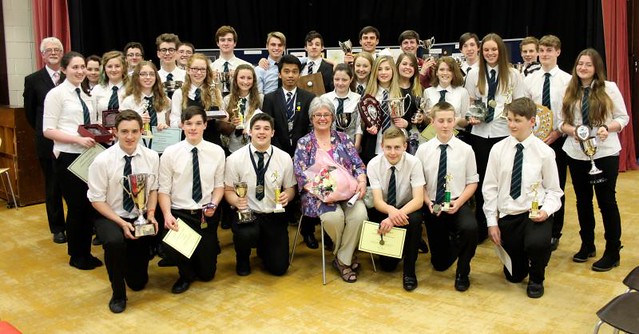 Details of the awards and certificates presented at Prizegiving this year are available on the website along with a large number of photos.  Click here.

At the ceremony held in the school on Monday 29th June C for Craic and Gairloch & District Pipe Band provided the music. We were also pleased to have the blessing of Reverend Dan Paterson, the newly appointed minister of Poolewe and Aultbea Free Church.

In the Headteacher’s speech, Mr Port mentioned and thanked those staff that have either retired this year or are moving to new jobs. Mrs MacLeod, Ms Leitch, Mrs Newman, Mrs Campbell, Ms Mackison, Mr Avenel and Mr Johnston. All will be missed. Mr Port also welcomed new staff Miss Smith (Geography) and Dr Brindle (English). The appointment of a biology teacher is currently underway. Mr Port once again gave his thanks to all the school staff for their unstinting dedication to the pupils and the work of the school. Ms Mackison was presented with flowers as thanks for presenting the prizes and Dr Caley also received flowers in thanks for organising the event.

During Prizegiving the new senior prefects were announced and presented with their badges. For 2015/2016 the Head Boy is Joseph Smith and Head Girl is Freya Baptist. Depute HB – Referdinand Balanquit, Depute HG – Charlotte Kelman. House Prefects were also announced and the full list is available here on the school website.

Duke of Edinburgh’s Award GOLD – This year we have reported that three S6 pupils Sofie Banister, Innis Taylor, Siobhan Vickerstaff and former pupil Róisín Somers are receiving their Gold Award. We can now add Luke Gorman, former Head Boy, to the list. Luke is currently studying at the University of Stirling. Well-done Luke!  You can see photos from Holyrood here.

Success in local Mod – C for Craic won the Fiddle Group competition at the Inverness Provincial Mod on Friday 19th June.   Sandi MacLean won the 13-16 years Traditional Gaelic singing competition and also retained the Jessie Cameron Memorial Trophy for the second year in a row. Her performance was described as outstanding. Alasdair MacDonald won the 13-18 Accordion Competition and Sara Johnston was third in the Secondary Fiddle Solo competition. We have a very strong and able group of musical pupils at the moment and they continue to improve with the ongoing support of their tutors. Well done to all our winners! 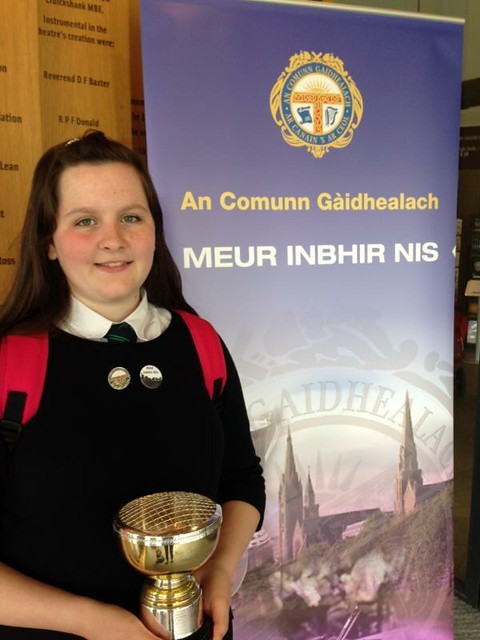 Youth and Philanthropy Initiative – The group representing the Gairloch Community Car Scheme (Connor Forbes, Cameron Tallach, Gregor Vickerstaff, Carla Watson and Breah Stephen) were judged to have given the best presentation and were given a £3000 cheque by Bruce Alexander representing SSE (who are co-sponsors of the YPI in Scotland). The group then presented the cheque to a delighted Christine MacIver!  You can read more and see photos here on the website.

Water Week 2015 – S1 have spent the last several weeks in World Class learning about what it means to be water vulnerable. They’ve looked at the causes of having little, or unsafe, water and how it can affect daily lives. To reinforce this message, each group had to carry the amount of water they would usually use in one day (varied from 80-140L) around the 200m track. You can read more and see some photos from the event by clicking on the photo below. 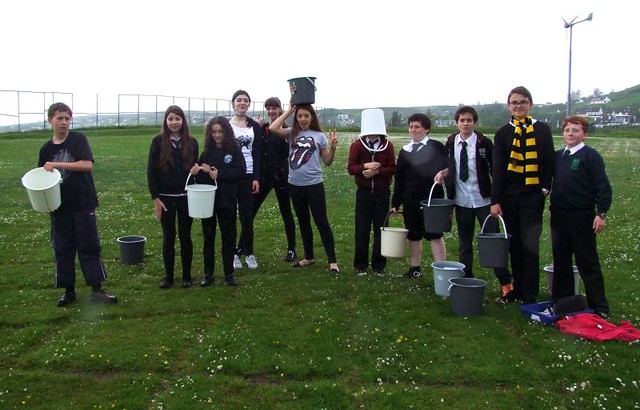 Drawing Competition – S3 pupils were asked to draw a toothbrush and toothpaste for homework. Local dentist Dawn Pickering chose the winners: 1st – Roddie Wyatt, 2nd – Arlene Morrison and 3rd – Scarlet Pickering. The Dental Practice gave the winner an electric toothbrush and will display all of the drawings in the waiting area. Well done to the 3 finalists.

Hannah’s Hair – Hannah Wood, S3, has been growing her hair for a while now with the intention of donating it to the Little Princess Trust. This is a charity that makes and supplies real hair wigs to children who have lost their own hair due to cancer treatment. The average cost to the charity is around £350 to make a wig. Hannah had 15inches of hair cut off recently and has managed to raise £500 (and counting). Well-done to Hannah! You can find a link here on the school website to Hannah’s JustGiving page and perhaps make a donation.

End of Term Football – The annual tournament took place on the last day of term with the vast majority of pupils taking part. Click here to read about the event and see photos of each of the teams.