The Youth and Philanthropy Initiative encourages school pupils to find out about social issues affecting people in their local community and about the charities who are supporting those people.  Having done this, pupils (in groups) create presentations about one of these charities.  The presentations are judged and the best wins £3000 for their charity.

Following the Charities Fayre in May, six groups of S3 pupils have been busy preparing presentations on their six chosen charities – Befrienders Highland, Highland Hospice, Gairloch Community Car Scheme, Gairloch and Loch Ewe Action Forum, Ross-shire Women’s Aid and CLIC Sargent.  With £3000 at stake, their presentations had to meet strict judging criteria as well as being interesting, thought provoking, creative and involving all team members.

On Wednesday 1st July, Ann Sim from YPI met our six judges who included school staff, pupils and members of the local community, to brief them on the judging process.  S3 pupils then gave their presentations to an audience of staff and pupils and the judges.  While the judges deliberated, C for Craic kept everyone entertained.

It proved to be difficult decision but the group representing the Gairloch Community Car Scheme (Connor Forbes, Cameron Tallach, Gregor Vickerstaff, Carla Watson and Breah Stephen) were judged to have given the best presentation and were given a £3000 cheque by Bruce Alexander representing SSE (who are co-sponsors of the YPI in Scotland).  The group then presented the cheque to a delighted Christine MacIver! 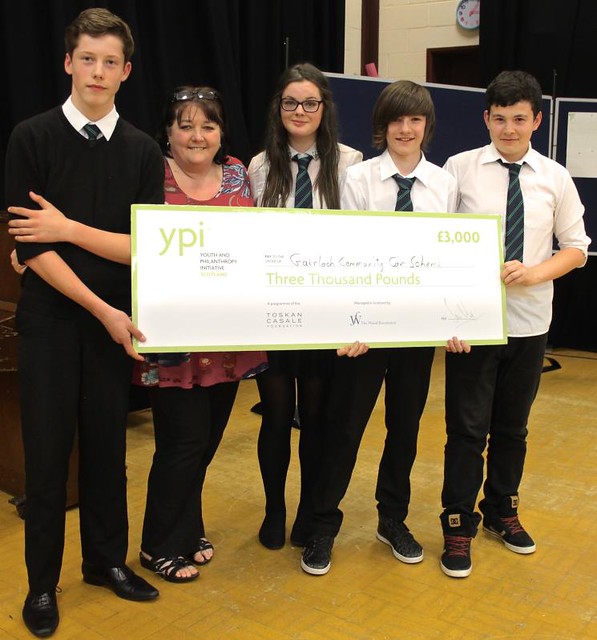 Click on the photo for more images from the event

YPI grants over one million pounds to social service charities each year, 100% determined by thousands of secondary school pupils who have been informed and empowered through this multi-award-winning philanthropy project.  Gairloch High are very pleased to now be involved in this scheme.