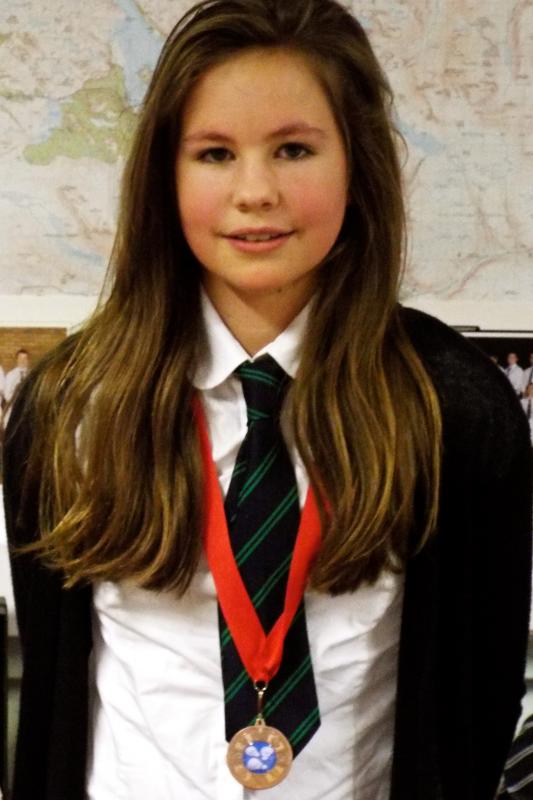 Nadia Fenton, S1, received a bronze medal at the Highland heat of the Scottish Schools Badminton Championships on Friday 12th December.  She travelled to Dingwall to take part in the competition and just missed out on a place in the final losing 23 – 21.  In the battle for bronze she won comfortably.  Well done Nadia!

The Christmas Dance seems to have been a big success with many pupils and parents making positive comments about the event.  In the last week there is a distinct sense that it is nearly the Christmas holiday but we still expect the pupils to continue with their learning.

S4, S5 and S6 pupils all have prelim exams when they return in January and cannot afford to relax or ease off in their studies.  In S6 we expect pupils to take much more responsibility for organising work schedules and planning their study routine both in school and at home.  Pupils hoping to continue their education in university cannot achieve success by only working in school under teacher direction.  We hope all the pupils will show focus and care in their work even if they do not wish to attend university!  There are study clubs organised in the first week back after the holidays.  Attendance this year has been lower than normal which I find slightly concerning.

Those applying for university in the coming year need to have their applications complete by Thursday, 8th January.

To encourage healthy bodies as well as healthy minds we have arranged a number of activities that allow the pupils to mix in different groups and gain house points.  This should not be interpreted as a time-filler.  We view these events as an important part of the school calendar and participation by pupils contributes towards the competition for the House shield.

On Thursday we will have the annual School Quiz. All pupils are already in House teams so if anyone is absent they may be letting their team and House down!  During the day between interval and lunch we will also be having an indoor rowing competition.  All pupils can row for individual points or join a House team.

On Friday morning we run our own version of the Krypton Factor and again I expect all pupils to come and take part.

After lunch on Friday there will be an assembly and pupils will head home with buses collecting pupils at 1.15pm from the school.  School will re-open on Monday 5th January 2015.

I wish you a Merry Christmas and a healthy, prosperous New Year! 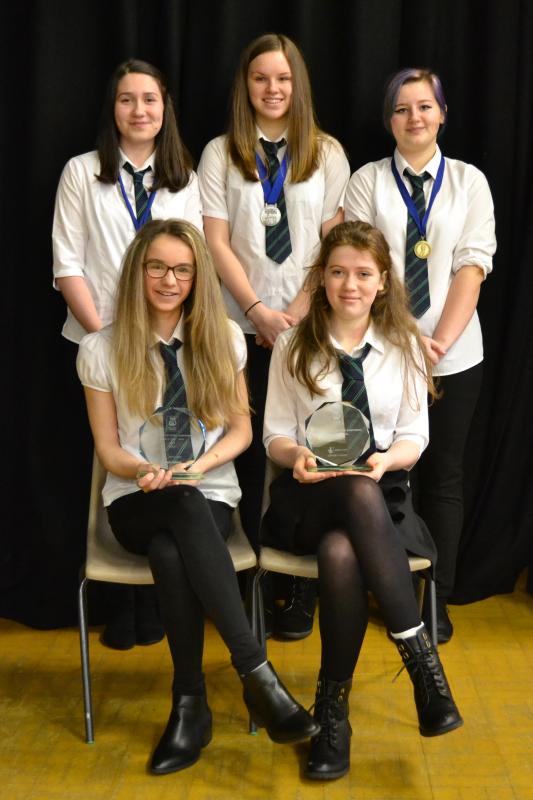 On Saturday 6th December the girls raced against the established rowing clubs. Yet again they won their race, this time against a combined team from five rowing clubs from all over Scotland to become Junior 14 Scottish Indoor Rowing Champions. Sara also won a silver medal in the J14, 4 minute individual race adding to the two medals already won.

What a great two days for the girls! Well done all including Mrs Johnston for training, travelling and mentoring the girls. Everyone is proud of you! 3 medals, 5 personal bests and 2 trophies. A great success – they have put Gairloch rowing on the map!  Click here to see more photos.

This all started with an idea that was supported by the Great Wilderness Challenge when they agreed to fund the purchase of 3 Concept-2 indoor rowing machines for the school.  For that original support the school is still very grateful.  The machines have brought a great deal of fun and activity in the lead up to this success by the pupils.

S4-6 Prelims Target Setting – Pupils in S4-6 have been working with their teachers preparing and planning for their exams which start in the second week of January. Parents should be aware that these pupils should now be focused on these exams. They have been given appropriate materials for their subjects and advised about the steps they need to take to achieve their best grades. The booklet ‘Information and Study Advice for Pupils and Parents’ has been issued to pupils in S4 and ‘new’ pupils in S5/6. It is available on the school website to refer to should any of S5/6 have mislaid theirs. We would ask that parents support pupils in preparation for these important exams.

Frozen – On Friday 28th November drama pupils performed in the afternoon to our five associate primaries along with the S1 and S2 pupils from Gairloch High. In the evening they did it again for the parents and senior pupils along with members of the community.  The hall at the school was full and the players (along with Helen) received a standing ovation from the satisfied audience.  It was a great day for the Drama Group! Drama teacher Helen Peat worked relentlessly to foster the talents of the pupils preparing them for the show. 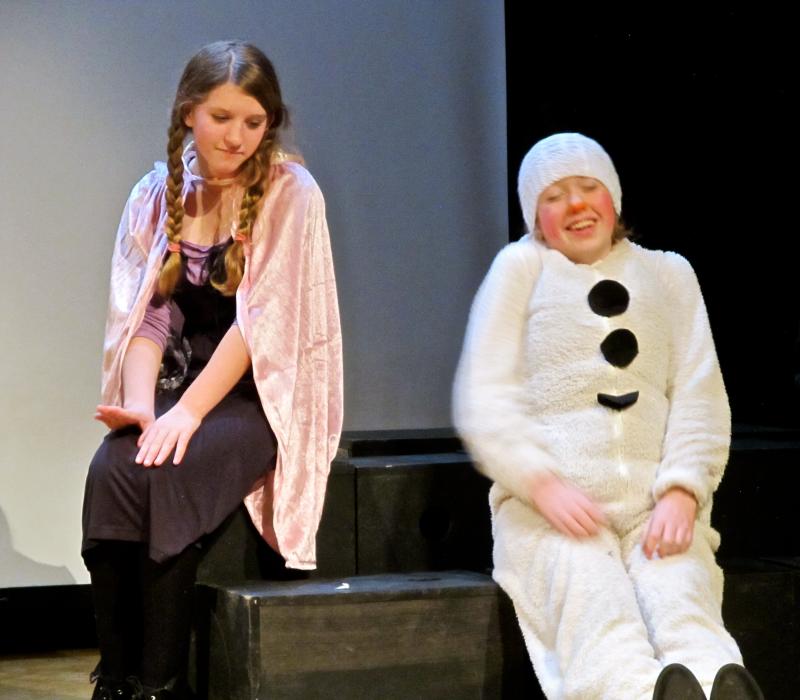 Interdisciplinary Learning – As Ebola is brought to the forefront of the news again with the release of Band Aid 30, pupils in S2 have been learning more about the disease across a number of classes. In World Class with Dr Caley, pupils came up with lots of questions they had about the disease and how it affects people in the places it is present. They spent time researching and are now equipped with the facts rather than the misconceptions about the disease.  In Geography with Miss Smith, they looked at how the lyrics of the original Band Aid compared to the new Band Aid song. Lots of the original misconceptions about Africa and its lack of rain, snow, religion or hope have (thankfully) been cleared up. However, there are a number of new lyrics that don’t accurately portray the situation caused by the spread of Ebola in a few West African countries. Many of those in the West African countries affected by the disease are French speakers. Pupils have been translating the lyrics of the French version of “Do they know it’s Christmas?” with Mr Avenel in French, and have been reading French news reports to see how the disease is being reported there.

Overall, students have been shocked at how many wrong ideas are openly broadcast so they have created a display outside the library to help explain the facts about the spread of Ebola and the wonderful diversity of the African Continent!”

Parental email addresses – We have started to duplicate information home to parents who have supplied email addresses to us. Any parent who wishes to make more regular contact with the school by email is invited to make sure we have your email address.

Rural Skills trip to Coulin – S5/6 pupils studying Rural Skills observed Neil Morrison of Coulin Estate working with Peter Cunningham capture salmon, harvest eggs and fertilise them as part of the Estate’s fish stock management. Thanks to Neil for allowing the boys to learn about this aspect of his work! 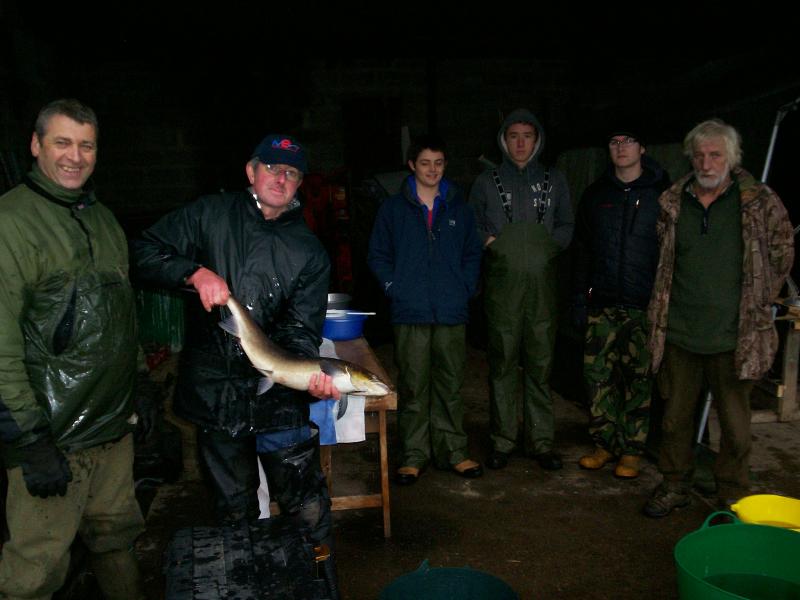 Click on the photo to see more images from the day 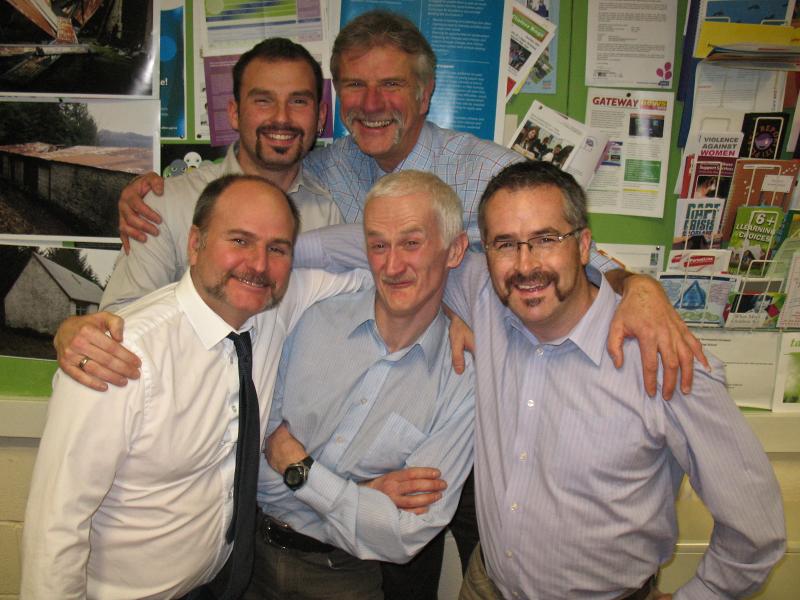 S5/6 sleepover – For the third year in a row a group of S5/6 pupils (27 this time) paid to stay over in the school all night! Over £150 was raised for Help for Heroes. Thanks to S6 for organising and Mr Milner, Mrs Somers, Mrs Widdows, Miss MacAllister and Miss Smith for helping with supervision.

School Calendar 2015 – Some copies of the school calendar displaying pupil artwork are still for sale (£6). These are available from Cornerstone, Library and School Office.

Due to the unusual range of warnings about weather conditions, travel disruption and power provision over the next 24 hours I have decided to close the school on Wednesday 10th December for all pupils.  There will be no school buses on Wednesday.

All senior pupils have plans and targets for their prelims after Christmas so have plenty to do during this break from normal class.

I will issue updates via the website and local radio on Wednesday and Thursday morning depending on conditions.  The telephone service will be updated first.  All parents have been sent details of the service and the numbers are available here:

Scarlet Pickering, Amber Drummond, Emily Morrison (all S2), Eilidh MacDonald and Sara Johnston (both S3) have been training after school with Mrs Johnston on Tuesday for several weeks in preparation for the Scottish Indoor Rowing Competition in Glasgow.

On Saturday 6th December the girls raced against the established rowing clubs. Yet again they won their race, this time against a combined team from five rowing clubs from all over Scotland to become Junior 14 Scottish Indoor Rowing Champions. Sara also won a silver medal in the J14, 4 minute individual race adding to the two medals already won the previous day. 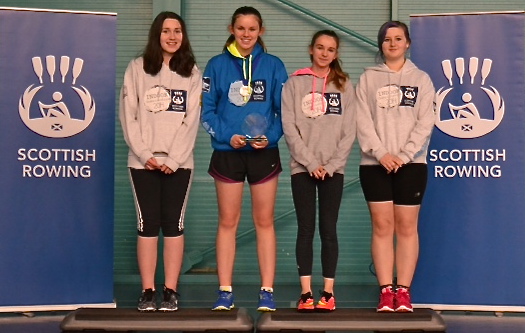 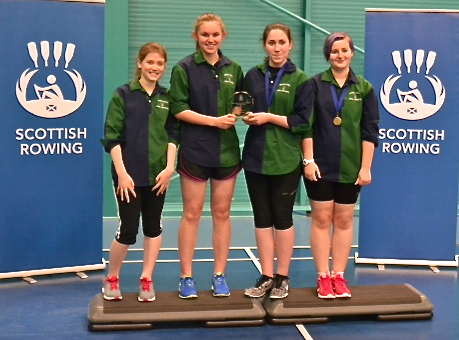 What a great two days for the girls! Well done to all including Mrs Johnston for training, travelling and mentoring the girls. Everyone is proud of you! 3 medals, 5 personal bests and 2 trophies. A great success – the team have put Gairloch Girls on the national rowing map!

The Championships were held at Scotstoun Stadium, one of Glasgow’s premier venues. “A high-octane environment with races going on throughout the two days where individual competitors race up to 2,000m and teams up to 3,000m in the quickest possible time. It provides a stage for indoor rowing enthusiasts to test themselves on a national level and assess their own performance and progress.”